With over 30 different Berlin car hire branches to pick from, renting with Sixt ensures you have maximum flexibility when starting your journey. If you arrive in the city by plane you can find us at both Tegel and Schönefeld airports, whilst we also operate out of all the major railway stations and BVG hubs. Our branches are located in various popular districts, including Friedrichshain, Neukölln, Prenzlauer Berg and Charlottenberg, and of course at popular tourist centres like Alexanderplatz, so no matter where you are staying we are certain to be close by. Simply scroll through the drop-down list to get precise information about any of our Sixt Berlin car rental offices.

The branch menu has a second tab where you can find an overview map of all the Sixt rental locations in Berlin. You can find the opening times and full addresses of each location on their individual branch page. All of our Berlin car hires offer 24hr return making it easy for you to plan your journey with utmost flexibility. Use our easy online booking form or give us a call to make your reservation and take advantage of our affordable prices. Please note that while we strive to provide customers with the vehicle they want we cannot guarantee specific models. Whether you need a vehicle for an hour, a day or a month, we are here to help you. 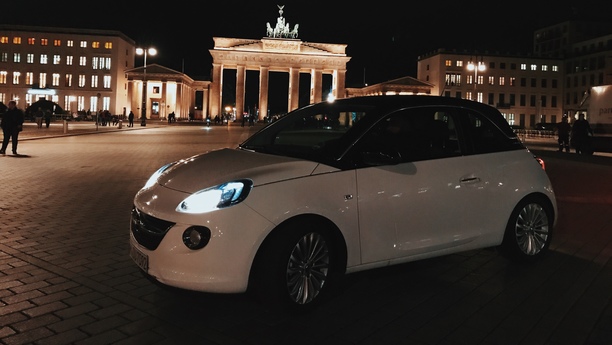 Sixt car hire services in Berlin extend far beyond a basic rental package: our huge fleet of vehicles from high-end luxury brands such as BMW, Jaguar, Aston Martin, Audi, Porsche, and Mercedes-Benz mean you can enjoy a premium experience at an affordable price. With car categories spanning from economy city cars to luxury saloons and estate cars to transport the whole family in, the options are endless. We can also cater to more specific tastes, with a range of convertibles, sports cars and 4x4s on offer across the city. If you are travelling in a larger group we have minibuses available catering to up to 9 passengers, and for those transporting goods we also offer vans and equipment such as tow bars from certain locations.

Travel from the Airport quickly into the Centre

If you are arriving in Berlin by plane you will either arrive in Schönefeld on the eastern outskirts of Berlin or Wedding if you land at Tegel. If the traffic is good, it will take about half an hour to get from Tegel to Alexanderplatz with its famous television tower, and around forty from Schönefeld.

Editors note: Its a good idea to use a Sat Nav or Google Maps on your smartphone while driving in Berlin. Be prepared to assert yourself on the road and know that Berlin drivers are quick to use their horns. Also be aware that there are numerous cyclists in the city whom you need to look out for, especially when turning.

Parking on the street is not recommended, especially in the city centre where it can be expensive. For example, an hour in Prenzlauer Berg can easily cost 3 euros but, in a nearby side street, its just one euro. As an alternative, you would be better off using car parks to park your car hire in Berlin where you will find affordable daily rates. Its good to know as well that central Berlin is a low emission zone, but when you rent a car with Sixt this is no concern as all of our vehicles are the most recent models and carry the necessary sticker.

Berlin spans almost nineteen miles from East to West and has excellent transportation infrastructure. Travelling in your hire car, you can get from the Berlin ring-road to the city centre in about half an hour, as long as the traffic is on your side. Be warned: rush hour can be frustrating and bring traffic to a halt, not to mention the various roadworks and building sites across the city as Berlin continues to undergo change. Therefore, it often makes sense to use the A100 motorway, even it means making a bit of a detour. This way with your car rental you can reach outer-lying districts like Steglitz fairly quickly.

If you took the train into Berlin then you will find yourself at the Hauptbahnhof central station, which was newly opened in 2006. The station is very central, just a 10 minute drive from Alexanderplatz, but unlike other cities the surrounding area is not as vibrant and lively as you may expect. Sightseeing highlights such as the Natural History Museum and the Hamburger Bahnhof are just a short walk away however, so you can enjoy these before picking up your car hire and heading out to explore other areas of the city. Head to famous sights such as the Reichstag (5 min) and the Jewish Synagogue (6 min), and look out for the Chancellery building (popularly known as the Washing Machine) on the way to the Reichstag. You can have fun in Berlin sightseeing at Museum Island and the Brandenburg Gate or go on long shopping trips. The Kastanienallee in Prenzlauer Berg, Münzstraße in the centre, and Bergmannstrasse in Kreuzberg are all recommended.

If you enjoy festivals, concerts and culture, Berlin is the place to be. From the New Years party at the Brandenburg Gate to the Carnival of Cultures or the Fete de la Musique, Berlin offers a top class cultural programme. Since German unification, Berlin has become the countrys most exciting city. This is mainly due to the creative enterprises which, since the 1990s, have taken up residence in vacant buildings and started various ventures. The largest of these is certainly Berlins club culture, which is unrivalled worldwide. To party late into the night you could go to Chalet, Gretchen, Kosmonaut or Humboldthain. The open air locations such as Else Club, Ipse and Magdalena are also worth a visit, especially in the Summer. Music bars like Haus am See, Promenaden Eck or the Minimal bar are recommended to those who dont want to be stuck within quite such a crowd. Berghain or Watergate arent recommended because of their strict door policy. If you do visit any of these places, please leave the rental car behind; you can experience first-hand the infamous local attitude from a native Berliner taxi driver on your ride home.

The former 50s American listening station in Grunewald should be familiar from its iconic profile of five radar domes. Stretching up 120 meters above the city, you are provided with exceptional views from the landmark. The hill that the station sits upon is named Teufelsberg, literally Devils Mountain, and the Teufelsee lake nearby is perfect for swimming in the summer. Thanks to its location in Grunewald, Teufelsberg is perfect for various leisure activities and is popular among hikers, cyclists and walkers. | Teufelsseechaussee 10, 14193 Berlin. .

From Berlin, its worth taking a trip to Potsdam to see Sanssouci Castle, one of the most well-known Hohenzollern castles in the Brandenburg capital. Its uniqueness attracts over one million visitors every year. The park has an unsurpassable beauty and is ideal for walks on sunny days. The castle and park, often referred to as the Prussian Versailles, feature outstanding examples of design and architecture. | Maulbeerallee, 14469 Potsdam.

Theres a lot to explore in Berlin. The IFA or ITB trade fairs are well-known far beyond the countrys borders and attract many visitors every year from all over the world. Messe Berlin is located at Messedamm 22 in Western Berlin. The city is also well known for its rapidly growing start-up scene, as well as being them home of some typical industry heavyweights. Siemens has several sites in Berlins Spandau and Moabit districts. Daimlers sales headquarters is opposite the East Side Gallery in Friedrichshain. The Mercedes-Benz Arena is right next door and is, after the Lanxess Arena in Cologne, the largest indoor arena in Germany. In the energy sector Vattenfall, based in Mitte, is the largest employer in Berlin.

Distances to the Mercedes-Benz Arena

Easily one of my best experiences with car rental. Their guys at the counter and return area were great…professional, competence and friendly…both smiled a lot 👍🏼 (Which is rather rare with car rental companies nowadays).

I rented a 850i this past week from Brandenburg Sixt.

The employee at the reservation desk was very helpfull although not as educated.(maybe she was new) ; we originally booked A6 but then wanted to upgrade the car to an M car to enjoy the week. She offered alot of M cars (They have immense stock) from Offroad to M3-M4-M5-M8; we wanted to go for M8 but later figured it was M850i when we arrived to pickup the car. She was technically right as it was an M car and we had luggage so decided not to go back all the way and change the car.

The car was OK at 8000km in odometer. Only had winter tyres so smaller rims. Other than that it was a good experience all around. They also reduced the 3000 Euro deposit to 500 Euro for us which enabled us to enjoy the car.

So overall ; it was a good experience from the begining till the end.

People complain about the prices especially for insurance which is Right ; but its no secret. You pay for what you agree from the beginning and if you are renting a car in Germany or in EU ; i definately suggest you do the full insurance ; these cars aint cheap.

Easy to pick up the car. Signes for car return could be a bit bigger.